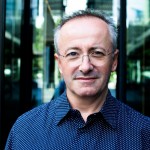 TV personality Andrew Denton has launched an extraordinary attack on what he has described as a “subterranean Catholic force” preventing the legalisation of euthanasia, saying that a network of Catholic politicians, business people and institutions constituted a “theocracy within our democracy”.

Mr Denton gave a speech to the Press Club, last week, in which he urged people of religious belief to vacate the public space so that euthanasia could be passed, something he said more than 70 per cent of Australians would support.

LifeChoice Interns Bring a Fresh Face to the Pro-Life Movement